Unique issues include pregnancy, menopause, and conditions of the female organs. Women can have a healthy pregnancy by getting early and regular prenatal care. They should also get recommended breast cancer, cervical cancer, and bone density screenings.

Women and men also have many of the same health problems. But these problems can affect women differently. For example,

Breast cancer is cancer that forms in the cells of the breasts.

After skin cancer, breast cancer is the most common cancer diagnosed in women in the United States. Breast cancer can occur in both men and women, but it's far more common in women.

Substantial support for breast cancer awareness and research funding has helped created advances in the diagnosis and treatment of breast cancer. Breast cancer survival rates have increased, and the number of deaths associated with this disease is steadily declining, largely due to factors such as earlier detection, a new personalized approach to treatment and a better understanding of the disease. 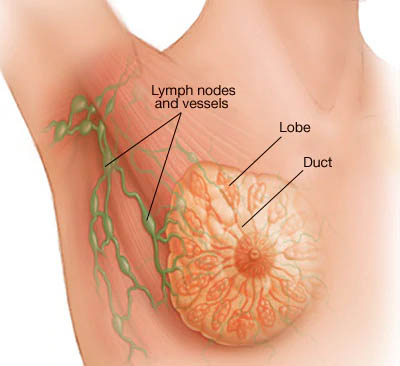 Cesarean delivery (also called a cesarean section or C-section) is the surgical delivery of a baby by an incision through the mother's abdomen (belly) and uterus(womb). This procedure is done when it is determined to be a safer method than a vaginal delivery for the mother, baby, or both.

A transverse incision extends across the pubic hairline, whereas, a vertical incision extends from the navel to the pubic hairline. A transverse uterine incision is used most often, because it heals well and there is less bleeding. Transverse uterine incisions also increase the chance for vaginal birth in a future pregnancy. However, the type of incision depends on the conditions of the mother and the fetus. 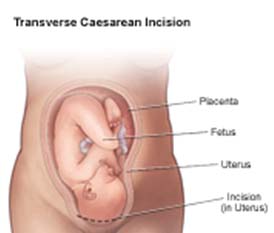